#7 About animism and animation
When The Silenced Speak

A video work by Chia-Liang Lai, Taipeh and Berlin, together with Takjo Jack, Wine A. Lami, Marshall Islands
(To obtain the right and pleasure to view or screen the full length of the video work (length is 4:12 min), you can contact the email: laichialiang(at)gmail.com)

The video shows a storytelling unfold from the traditional Marshallese drum Aje. The narrative is based on the vibrant cultural value of Marshallese drum and its transformation into a silent object in the museum. In the production process, the approach of 3D scan is undertaken animating the drum along with the concept of animism. The work actively explores a central question: If the drums could speak, what message would they convey to us?

The culture of the Marshall Islands lies in German cellars. But it is sorely missed on the Marshall Islands.
In the video, Meitaka Kendal Lekka talks about her thoughts and feelings when dealing with the numerous objects in German archives, objects that were brought to the German Empire during the colonial period and are still stored in the Federal Republic today, without there being any concept for a return transfer of cultural knowledge. Clearly something needs to be done here. But who does it? And when does it start?

From Saturday, April 2nd to Monday, April 4th 2022, visitors to the famous „Bootskiste” – „Oceania – People and the Sea” in the Humboldt Forum encountered works that were created by students from the Kunsthochschule Weißensee in collaboration with students from the College of the Marshall Islands.

The empty space at „Oceania”, waiting for one last boat from the collection, was temporarily occupied by videos, sculptures, sound installations and temporary actions. The program started with a live stream between Berlin and the Marshall Islands and bridged a 10-hour gap with dances, speeches and a show round at the Humboldt Forum.

Some visitors learned for the first time that the Marshall Islands were colonized by Germany. Others recognized problems such as plastic pollution, rising sea levels and nuclear toxins around the islands alongside traditional boat building and navigation techniques normally exhibited in the museum.

Below are some impressions from the exhibition. 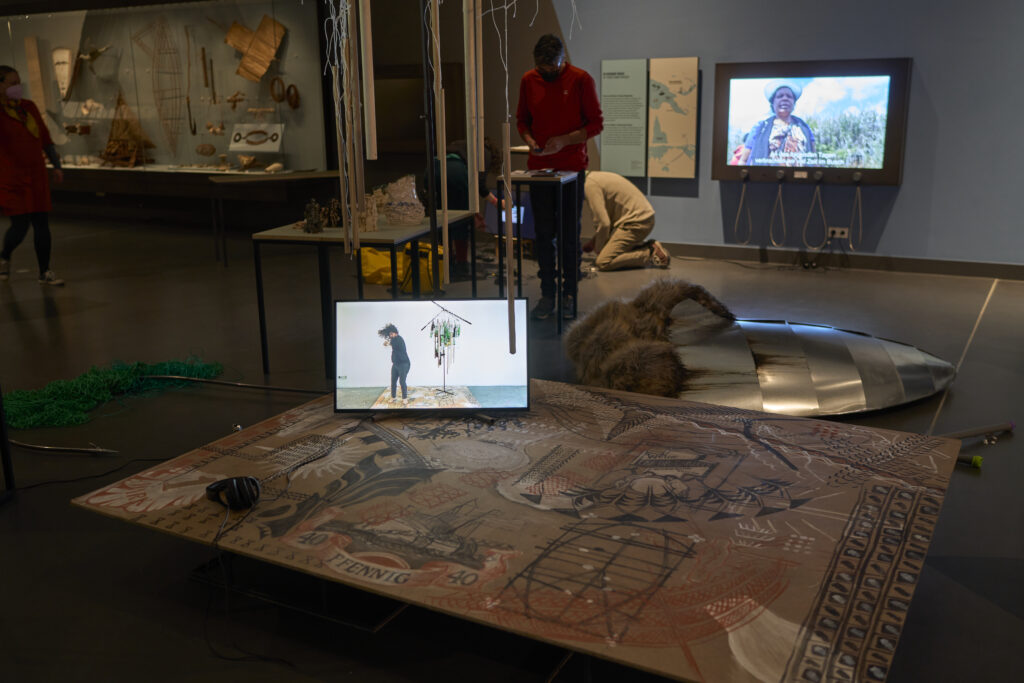 “The Legacy Heritage”, video-performance and decorated platform, by Fadi Aljabour with input on traditional dance from students of the College of the Marshall Islands. Photo credit: Manuel Strube. 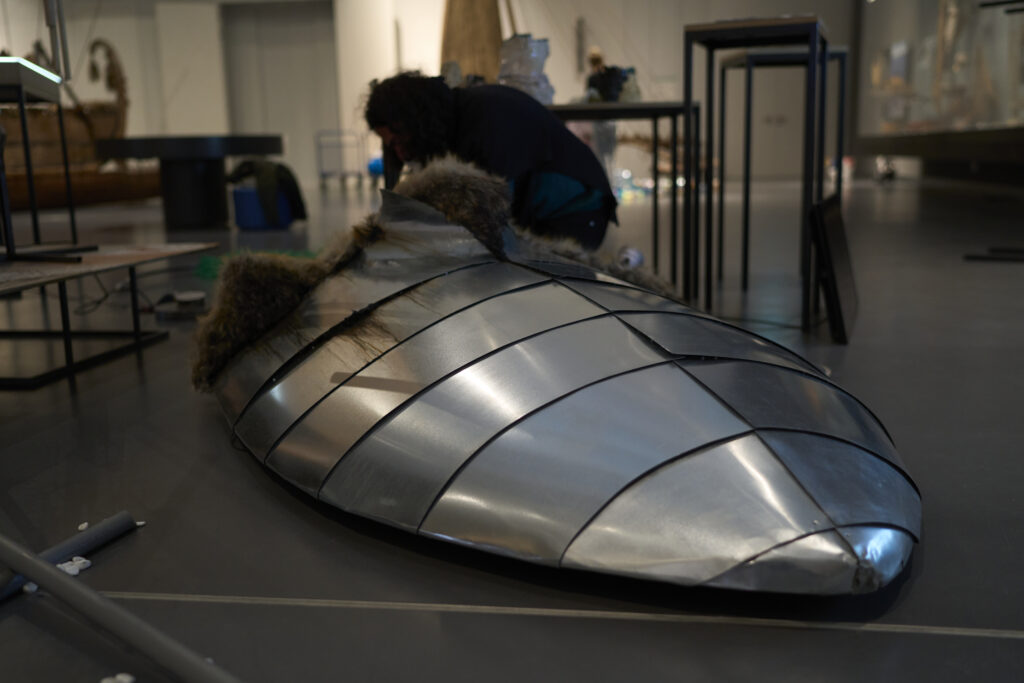 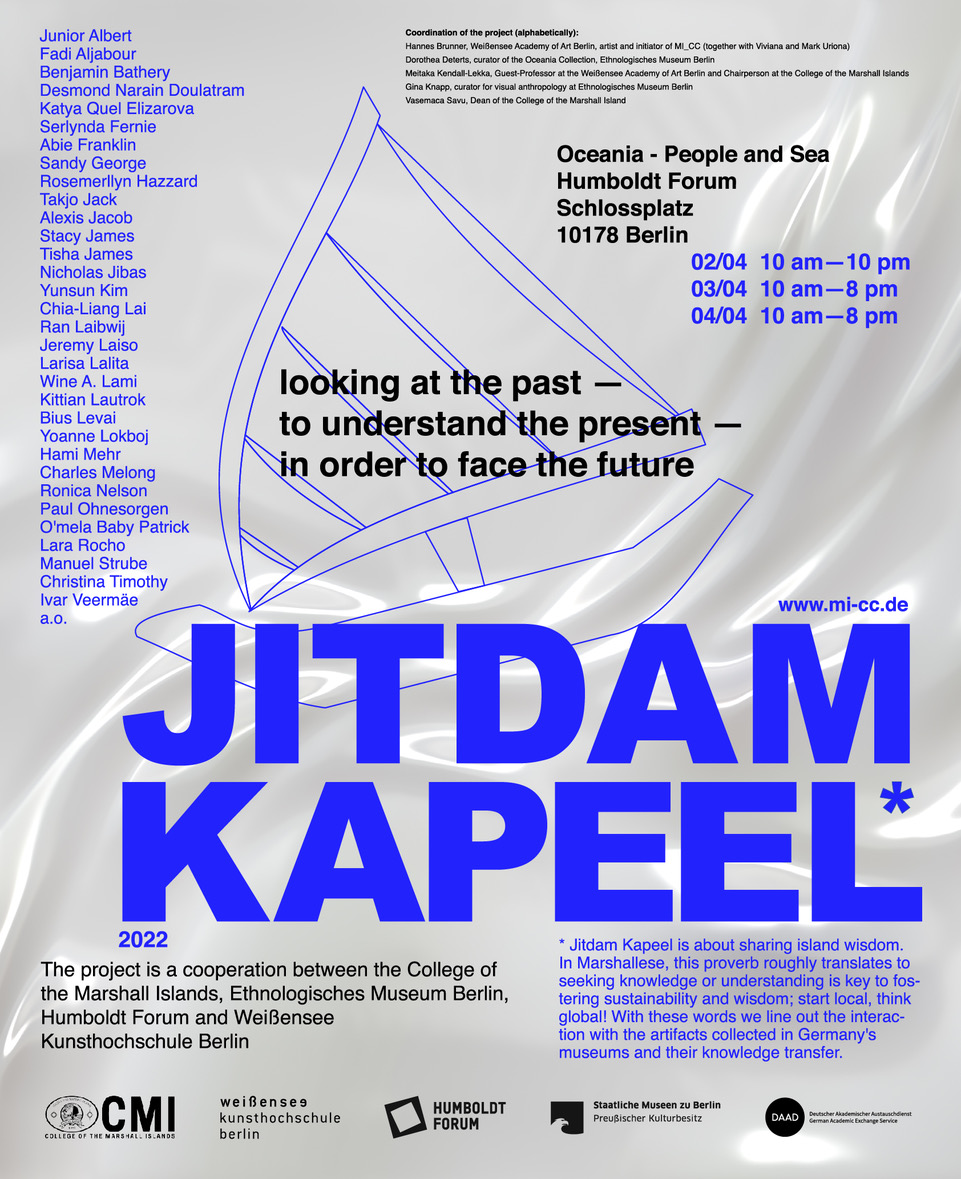 looking at the past

to understand the present

in order to face the future

in the Boats of Oceania Hall (Oceania: People and Sea)

The project is a cooperation between the College of the Marshall Islands, the Ethnological Museum Berlin, the Humboldt Forum and the Weißensee Academy of Art Berlin.

Jitdam Kapeel* is about sharing island wisdom. In Marshallese, this proverb roughly translates to seeking knowledge or understanding is key to fostering sustainability and wisdom; start local, think global! With these words we line out the interaction with the artifacts collected in Germany’s museums and their knowledge transfer.

Together and with different perspectives and interests, Marshallese and Berlin students present performances, models and installations as a kind of impartial transfer of knowledge from a former German colony and back again. At the same time, artifacts that have long been kept in local collections are being presented to the descendants of those who gave them up for the first time in more than a hundred years.

During the weekend of April 2nd, 3rd and 4th, in the HumboldtForum’s Oceanic Boat Hall, directly in front of the Marshallese Canoe, a variety of events will be happening, including a live broadcast from the College of the Marshall Islands.

Participation and contributions, in alphabetical order:

Coordination of the project, in alphabetical order:

Hannes Brunner, professor of sculpture, Weißensee Academy of Art Berlin, artist and initiator of MI_CC (together with Viviana and Mark Uriona)

Meitaka Kendall-Lekka, Guest-Professor at the Weißensee Academy of Art Berlin and Chairperson at the College of the Marshall Islands

Gina Knapp, filmmaker and curator at the Ethnological Museum

Vasemaca Savu, Dean of the College of the Marshall Islands

#3 Being Colonized and Colonizing

Some time ago in 2021 MI-CC held a remarkable zoom-talk with guest speaker Desmond Narain Doulatram (CMI, College of the Marshall Islands), Prof. Meitaka Kendall-Lekka (Weissensee Kunsthochschule Berlin, Chairperson at CMI) and Prof. Hannes Brunner (Weissensee Kunsthochschule Berlin) on the topic of the colonial past of the Marshall Islands as part of the German Empire. This talk has now been edited and illustrated by Ivar Veermäe and can be watched here.

A Marshallese professor from the College of the Marshall Islands is teaching at the Weissensee Kunsthochschule Berlin (Germany) since autumn 2020: Meitaka Kendall-Lekka. It was an uphill struggle to get her and her family to Germany with her family, especially under pandemic conditions.

Now she brings her students at the KHB into contact with topics that should really not be missing in art: colonialism (the Marshall Islands were once a German colony), climate change (the islands are only just above sea level) and nuclear heritage (the Islands were test areas for nuclear fusion and fission bombs).

She spoke about the atomic bomb tests on the Marshall Islands under the title “The paper remained cold” in a panel discussion (produced by kameradisten.org for ALEX TV) with Prof. Dr. Wolf D. Hartmann (“The Bikini Scandal”), Dr. Nadim Samman, (“As We Used to Float”) and Prof. Hannes Brunner, (KHB, co-initiator and coordinator of the MI_CC project) and Dr. Viviana Uriona (Director: ONE WORD). ALEX did broadcast the talk three times, on April 10th at 7pm, on April 11th at 10pm and on April 12th at 1pm (CET, add 12 hours for Marshallese time).

The Weissensee Academy of Art Berlin and the College of the Marshall Islands (CMI) have started a cultural exchange as part of an artistic research on climate change, post-colonial participation and media communication.

Prof. Meitaka Kendall-Lekka from CMI has arrived in Berlin to teach as a guest professor for one year at the Weissensee Kunsthochschule Berlin as part of an DAAD-funded project.

The European ideas of areas like the Marshall Islands (in the wider sense Micronesia) still consist of tourist visions of pristine beaches and indigenous cultures. Paul Gauguin’s 19th-century paintings in Polynesia are being increasingly critically commented on, but still they fill the exhibitions and box offices of renowned museums and they spread a questionable, outdated picture ethic.

The fact is that the Pacific Atolls and Islands are living environments that suffer on the one hand from their colonial and postcolonial history (until 1914 they were a German colony) and on the other hand they are severely affected by climate change. These realities must finally be taken as a basis for contemporary art development. For artistic practice it is important to blend into each other social interaction (e.g. through media), the connection of useless with necessary materializations, the hyper objects, as well as the exploration of digital capitalism and thus try out social models between utopia and dystopia realistically.

Such a connection is made possible by the direct discussion in the project. Cooperation with the Humboldt Forum is also planned in the course of the project.

Students of the College of the Marshall Islands and of Weissensee Academy of Art Berlin can be part of this enthralling project. Please write an email to contact@mi-cc.de to become part of MI-CC.

Méitaka Kendall-Lekka, born in Majuro in 1983, belongs to the Rimwejoor, clan “Jowi”. She has been a professor and chairperson since 2014 of the Chair of Business Studies Department at the College of Marshall Island, Majuro. She holds an MBA from Chaminade University of Honolulu, and is a PhD candidate in Creative Leadership for Innovation and Change at the University of U.S. Virgin Islands, St.Thomas US Virgin Islands. In addition to dealing with internet-based learning and teaching, Ms. Kendall-Lekka is an active member several NGOs, such as Jo-Jikum, who is very active in climate protection. In 2019 she received the “Young Pacific Leaders” – Award for your political / cultural engagement. In February 2019 she represented the President of the Marshall Islands, Hilde Heine, with the mock session of the YPL climate change program at the Pacific Island Forum in Suva, Fiji. She is married and has a child.

MI_CC’s internal platform is ready for work. Students of the College of the Marshall Islands and of Weissensee Academy of Art Berlin can be part of this enthralling project. Please write an email to contact@mi-cc.de to become part of MI-CC and to receive access to the internal network.

Featured video for the upcoming MI-CC sessions: The Trailer for the Movie “ONE WORD” by Studio Kalliope + kameradisten.org – that we will watch together during the course. More information you find on the movie’s website here.

Featured video for the past MI-CC sessions: Kathy Jetnil-Kijiner (RMI) and Kalaallit Nunaat (Greenland) performing “Rise: From One Island to Another.” More information you find on the project’s website here.

This website uses cookies to improve your experience while you navigate through the website. Out of these cookies, the cookies that are categorized as necessary are stored on your browser as they are essential for the working of basic functionalities of the website. We also use third-party cookies that help us analyze and understand how you use this website. These cookies will be stored in your browser only with your consent. You also have the option to opt-out of these cookies. But opting out of some of these cookies may have an effect on your browsing experience.
Necessary Always Enabled
Necessary cookies are absolutely essential for the website to function properly. This category only includes cookies that ensures basic functionalities and security features of the website. These cookies do not store any personal information.
Non-necessary
Any cookies that may not be particularly necessary for the website to function and is used specifically to collect user personal data via analytics, ads, other embedded contents are termed as non-necessary cookies. It is mandatory to procure user consent prior to running these cookies on your website.
SAVE & ACCEPT